In London, so often the vast array of “new & noteworthy” haunts can be over hyped and underwhelming. Every week, the newest, hippest chef opens the newest hippest eatery, though all too often what you get is old and tired.

Once a dining blue moon, you find a rare gem that you can really invest yourself in for a “Sunday Sit In” ……. Enter Blixen.

The staff were attentive,  charismatic and all that you would hope for for a Sunday service. They were jovial and light-hearted to really encourage a feeling of welcomness, but sypmathetic & understanding of the desperate need for caffeine that we all face on a Sunday.

The food… This is always a tall order with me and I am by no means a sufferer of fools where an over-cooked poached egg is concerned. Luckily, the charm extended to the food and my Boston Bean eggs were fabulous, if not a smidge rich. That said, after meeting the chef that literally brought these beans over from Boston, you can see where they get their bronx style attitude and kick.

My guests had the Eggs bennedict and the amazing full breakfast. Of these dishes, take two words away with you….”maple bacon”…. that is all.

More of a Savoury girl than pudding, it is unusual that I would even bring attention to the sweets menu. But… this is no ordinary creme brulee and chocolate torte… Non Monsieur.  We had one (ok two) scoops of every ice cream they had, the coconut sorbet was a crowd favourite… When I say crowd favourite, I mean that I harped on about it until people agreed just to stop me talking. (You will not regret it). 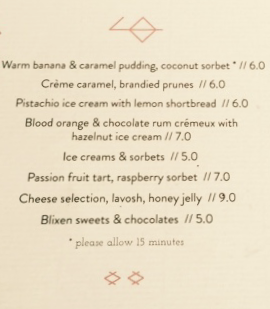 Finally, their front of house was incredibly attentive and interesting without being over-bearing or over-selling their bubbles. He also remained light-hearted and welcoming despite us seeing through a Brunch and a late lunch/early dinner service. He even brought us some guilt free miniature espresso martinis. Its enough for a “snifter” but not so much that you inevitably end up in trouble.

After 7 hours and 1000 glasses of champagne, it is easily forgiven to suggest that perhaps my heart may have been won over by bubbles. This is 100% correct ordinarily…. But as luck would have it, my opinion was formed with only 1 down the hatch and all faculties fully present.