As a half-Greek girl there is one thing I know well…. (other than Grandmother Guilt) and that’s Mediterranean Food. Yes, I know the Moussakas, the Souvlakias and The Baklavas (I am claiming them), but it is much more than that and more importantly…. in abundance.

My grandmother (or yia yia) is still “distraught” that I limit the amount of bread that I eat and the fact that one of my brothers wives is vegetarian… That nearly caused an emancipation. I haven’t had the heart to tell her that I have switched to almond milk as that might just be the end of our relationship all together.

So, when I went to review Milos, my expectations were sky-high…. as luck would have it, they were ready for me and the weight of my yia yias disapproval on my shoulders.

On arriving the first thing you will notice is the door… As you know, I LOVE a grand door. This is no exception. On entering the restaurant, t is unlike any greek restaurant I’ve seen before. Its chic. Its grand and its luxurious.

This is not to say that Greeks can’t do luxury… We had Aristotle Onasis for God’s sake… but usually Greek food means big mezze’s, lots of humous and lots of lamb. However, it doesn’t always have to be that way… Milos is the sort of restaurant that you would find in Mykonos. Utterly chic, completely stylish and a focus on high calibre design as well as food.

Fish. This is the first thing you will see as you walk through the restaurant. There is SUCH an array of fish on what can be considered to be the ice display of ALL ice displays. 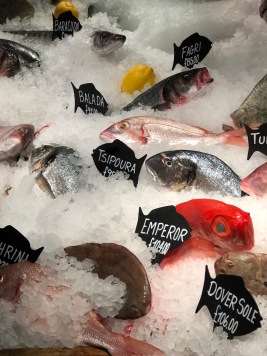 The thing that is so surprising is the variation, on one “Iced catwalk” (My quote, not theirs) they had Sea Bass, Squid, Lobster, Grouper, Turbotine, Dover Sole, Scorpion Fish, Balada, Emperor Fish… I will stop listing them but you get the picture.

One of my favourite things about Milos is that on arrival, one of their chefs comes to escort you to the Iced Catwalk to pick your individual fish and any seafood that you’re having. He then makes suggestions of the other menu items that will compliment this.

Having had a very fresh-fish-critical Grandfather (Bapou in Greek), I know how to spot a good fish… apparently, “It’s the eyes, Koukla Mou.” I am pleased to report that they had perfect, bright and charming eyes.

However, they are not cheap, the fish are quite expensive and start at around £80, but then its important to know that they are being shipped in the main from Greece on a daily basis and go from boat to table in one day and this… well its pretty expensive to do.

The other thing that they have that I really liked was their Milos special…. Lightly fried courgette, aubergine and Kefalograviera Cheese parcels (which are ridiculously delicious). Its like a mille-feuille, if mille-feuille were savoury, and had a hidden centre of tzatziki and cheese parcels…. which is frankly what I believe is missing from them. 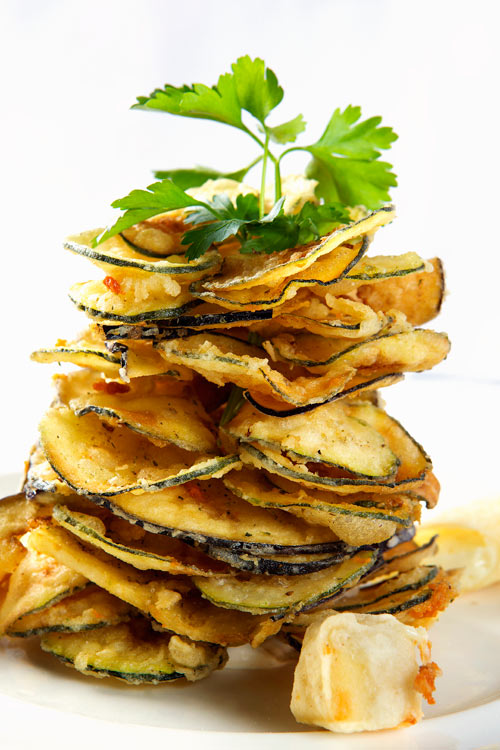 We also had Calamari and fresh breads to start. Ordinarily, I would go easy on the bread before a big meal, but this bread came with theatre (they chop the herbs fresh into the olive oil) and Greek charm so you know… it would have been rude not to eat it all. 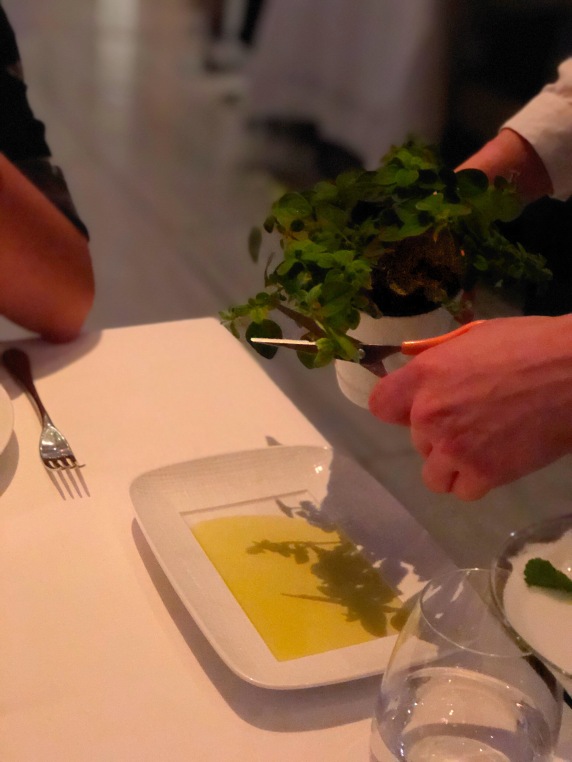 The calamari had the perfect ring to tentacle ratio. I always go for the tentacles which means that my guest (who will always usually prefer food without suckers) can go to town on the rings. Incidentally, I will always steer clear of a fillet of beef in favour of the rib-eye and avoid the white meat on a chicken…. I don’t want to say that I make the perfect dinner date sharing companion, but… you know…

Then… we had our fish… Aka. The Fagri. Have I heard of it? No. Was it delicious? YES. Beautifully soft but with enough meatiness to feel like a main course. As it was described to me, “Somewhere between Grouper and Seabass but less oily”. Accurate and perfectly served with oil & lemon. Exactly how I like white fish. Really delicious. 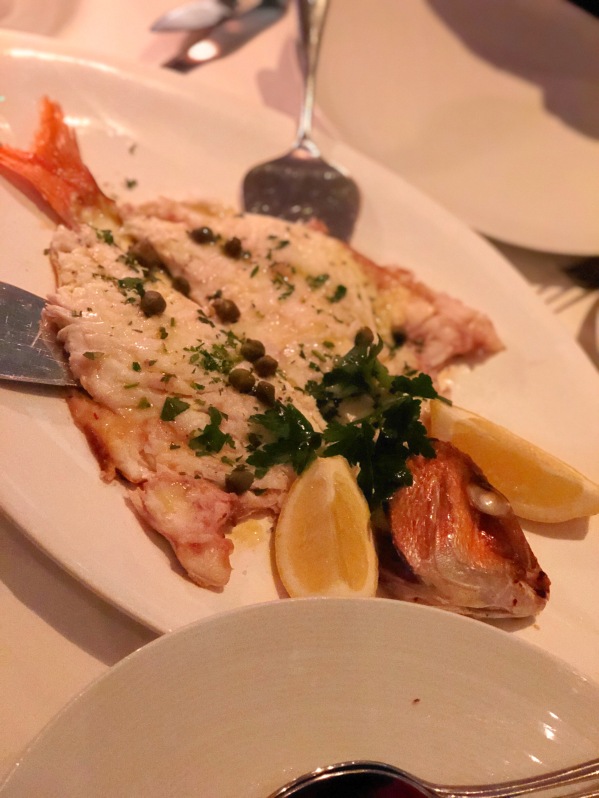 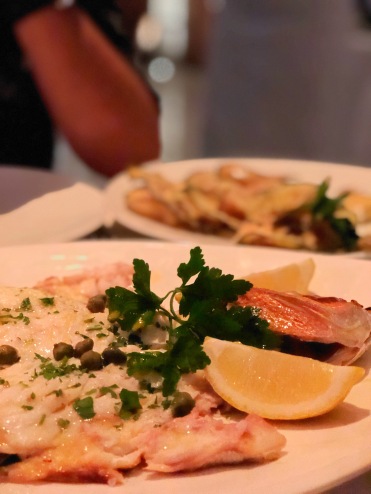 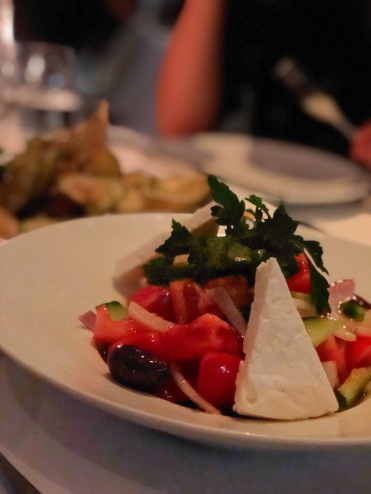 Do they have other foods? Sure, but for me trying their Grilled Lamb Chops (which looked delicious) would be the equivalent of going to a famous steak restaurant and asking for a caesar salad. Punishable.

Dessert was their chefs choice. This consisted of a chocolate delice slice, a greek yoghurt and berry combination, pistachio ice cream, and…. Karidopita! (A walnut cake with spices) If you can say that without throwing a hand in the hair and shouting it, frankly you’re a better person than I am. 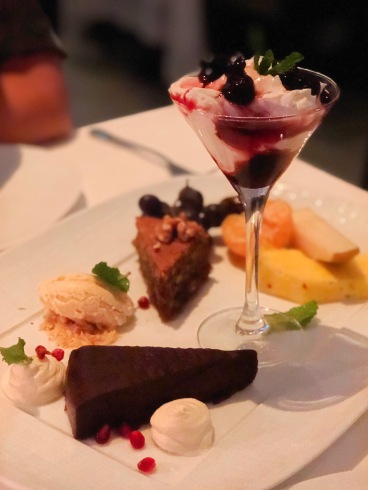 We had a citrus gin based cocktail with a mint garnish and egg white foam. For someone who doesn’t love overly sweet cocktails, this was perfect.

We then took wine recommendation of the sommelier Alexandros.

We had a beautiful 2016 Parparoussis Sideritis to start which was a dry which I definitely favour. For the main, and something a little more heavy and aromatic, we went for the Assyrtico Areti 2015 Biblia Chora. If you like a heavier wine without going as far as a sauvignon blanc, this is ideal for you and the fish was just punchy enough to stand up to it.

Honestly, I was really surprised at how vibrant and fun the atmosphere was for a Wednesday night in St James.

The clientelle ranged from groups of friends celebrating, a couple of couples and one or two families (with older children) and it was really lively. 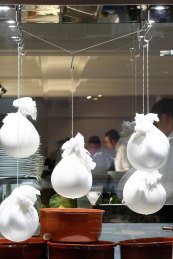 It is the sort of place where people (me) laugh wildly without the table next to them battering an eyelid and cheers from groups are intermittent across the floor for most of the evening. It’s the type of place I wouldn’t hesitate to book for a fun night out with a group of seafood loving friends. 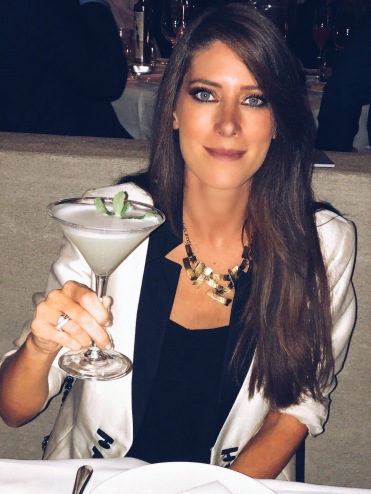 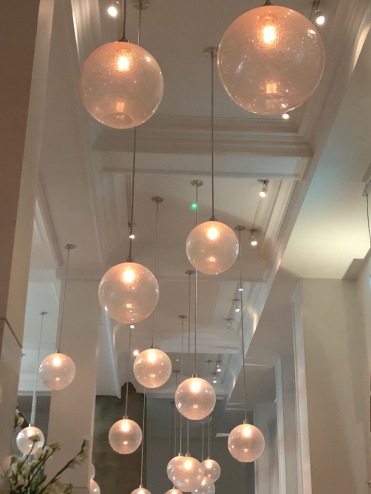 This is not a cheap meal, but then if you want Taverna prices, you’d go to a taverna.

Take it from a Greek girl… I’ll DEFINITELY see you there again soon. Yammas!