Audrey Hepburn once said, “Paris is ALWAYS a good idea”. What she left out is that while the idea is great, the logistics of finding a great hotel prove a little more challenging.

There are more hotels in Paris than there are croissants (totally embellished and incredibly inaccurate statement) and so sometimes, you need a little help in choosing… Oh hi there.

As much as I love a giant resort hotel, with 47 restaurants and segways to and from your room, in Paris I want to feel as if I am in a chic little private and secluded pied-a-terre amongst the most luxury streets. I.e. I want to feel like I am in Paris, not Florida. Enter Hotel De Nell. 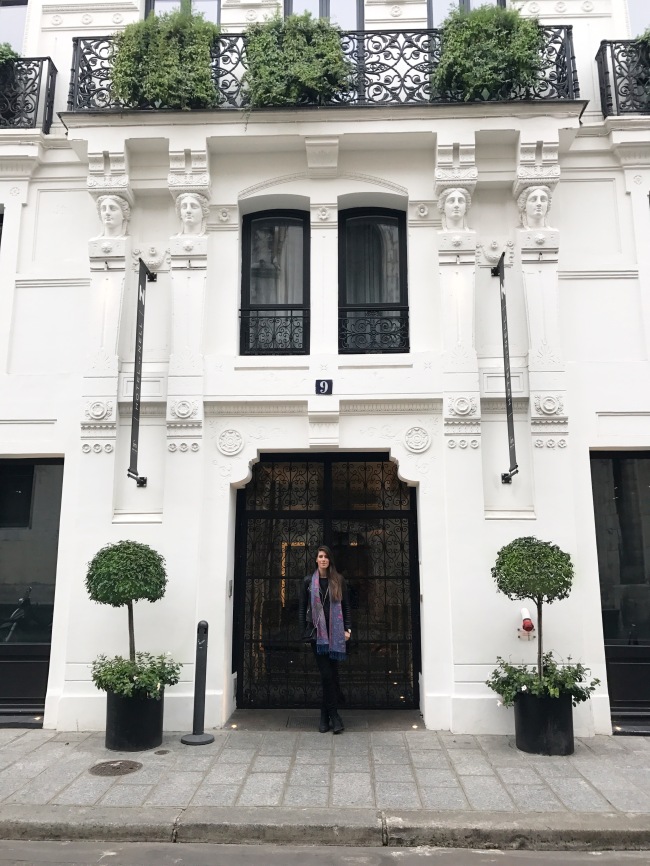 A Design Hotel and part of the Charm & More collection. Designer Jean-Michel Wilmotte ensured from the very front door, this is the absolute epitome of Parisian Boutique chic. 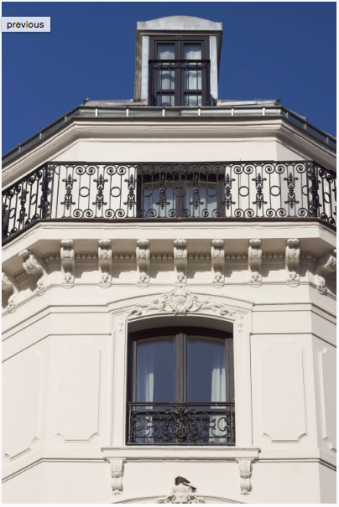 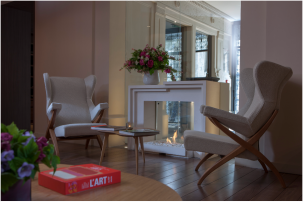 So, what is so different about this hotel? Firstly the sensational boutique design. Although what is just as impressive is the service. It is excellent.

Need proof? On one (very rainy) afternoon, I got a taxi back to the hotel. Now, I don’t know about you, but if this was pre-app 2002, über & hailo would be on speed-dial. Because of this, I just got out of the taxi and minced away only to have the driver chase me… Thinking this was an über, I had zero euros with me and his card machine had broken. No sooner had I thrown out some vaguely questionable French than the front desk Manager had come outside and paid the taxi himself, telling me that he would just settle it on the bill later on… Embarrassing? A little…  Charmed? Abundantly.

Truthfully, all of the staff go way beyond to ensure that their guests are looked after and leave feeling like they have had special individual attention.

The hotel has 33 guestrooms which are all a little different. Oh, and as a great little touch, if you have a deluxe room or higher, they gift you 4 complimentary soft drinks per day… which is always a nice change from being charged 43€ for a small bottle of Orangina and a funsize mars bar.

The rooms are all decorated in a bright, minimalist and luxury design with maybe the most comfortable beds in Europe. I am not saying that this is confirmed, but it it took me considerably longer to get out than normal. 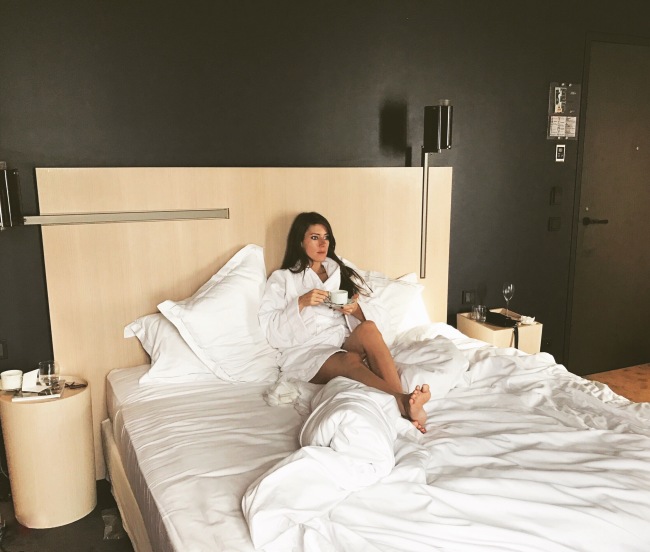 This is made all the more difficult with the in room Nespresso machine, which is always one mark of a great hotel.

This is the crowd pleaser. 17 rooms and suites of the hotel have Japanese baths. If you haven’t seen or “sat” in one before, they are made from a solid block of marble and inside them, you’ll find a wooden seat to perch on. In short, it is basically what would happen if a sauna and a bath had a child. It is supposed to combine elements of water and land but frankly, symbolism aside…. It looks SENSATIONAL. 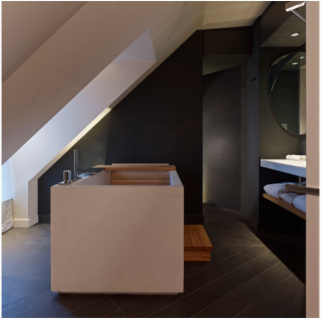 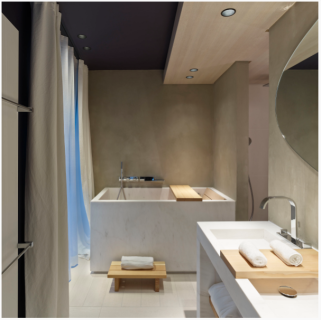 The hotel restaurant (la régalade conservatoire) by Bruno Doucet describes itself as a lavish, liberal, and down-to-earth concept: “bistronomy”.

If you’re looking for that relaxed Parisian atmos with rich food, then they have dishes like, Creamy squid ink risotto with Espelette pepper and garlic roasted gambas and “La vache qui rit” cheese emulsion, or their Caramelized pork breast from Ospital with sauted seasonal vegetables and maybe the Warm Grand-Marnier soufflé…. As if soufflé isn’t decadent enough… pop some booze in there.

They also serve a fab breakfast until 11am which is perfect for me who is clearly not capable of human interaction until 10 after a night out in Paris. 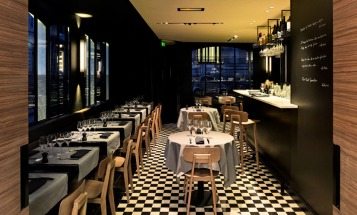 They have a great little bar in the hotel which I actually made quite a lot of use of. a) Because the cocktails (including their punchy Negroni’s) are really good but also b) Because they make these ridiculously light (I mean, they are borderline weightless) madelines that I became addicted to. Would I ever eat or even order madelines usually? No. However, I have now developed a weird addiction.

The bar is open from morning until late in the night when last glass has been drunk and the last madeline has been eaten… by me.

Once your shopping shoulder™ (Not actually a ™) kicks in, you will obviously need to recuperate with a massage. Their spa “The Cinq Mondes” provides a whole list of different massages to help with your muscle aches regardless of how heavy your shopping bags were…

What is nicer is that they are available 7/7 from 7am to 10pm for that pre-cocktail relaxation.

If interacting with other people is too much and staying in your own apartment is more your scene, then their secondary Résidence Nell gives you the intimacy of a private mansion. There are 17 apartments and studios designed by Patrick Jouin.

So… Is Paris always a good idea? In theory… So, if you’ve already got the idea, Hotel De Nell will help with the logistics.